To the Western scholars, Indian Astronomy is mysterious. Let us see what astro scholars have said about IA.

"The planetary models of ancient Indian mathematical astronomy are described in several texts.1 These texts invariably give algorithms for computing mean and true longitudes of the planets, but are completely devoid of any material that would inform us of the origin of the models. One way to approach the problem is to compare the predictions of the Indian models with the predictions from other models that do have, at least in part, a known historical background. Since the Indian models compute true longitudes by adding corrections to mean longitudes, the obvious choices for these latter models are those from the Greco-Roman world. In order to investigate if there is any connection between Greek and Indian models, we should therefore focus on the oldest Indian texts that contain fully described, and therefore securely computable, models. We shall see that the mathematical basis of the Indian models is the equant model found in the Almagest, and furthermore, that analysis of the level of development of Indian astronomy contemporary to their planetary schemes strongly suggests, but does not rigorously prove, that the planetary bisected equant model is pre-Ptolemaic" says he.

 New Page 1 The earliest Indian Planetary Models are two sets from the writer Aryabhata, both dating from 6th Century AD.

1) The Sunrise System , after the Epoch, which is taken from the sunrise of 18th Feb 3102 (Arya Paksha ). It appears first in Aryabhatiya

2) The Midnight System, after the Epoch, which is taken from the midnight of 17/18 FEB 3102 ( Ardha Ratri Paksha ). It appears first in Latadeva's Soorya Siddhanta

In the case of Mercury, an inferior planet in the diagram above, the center of the Sheegra Epicycle is located on the straight line running through the Sun and the observer, on the geographical parallel of the observer.

The above diagram is by courtesy of Jean-Pierre Lacroix and Robert Baywater,www.ancientcartography.net 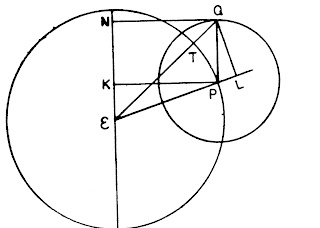 The Sheegra Phalam, x, in the equation 1/2 Tan ( A -x ), where A is the Elongation or Sheegra Kendra, obtained is deducted from the Sun's longitude, to get the geocentric longitudes of Mercury and Venus.
In the diagram above, the geocentric distance, EQ called X here , the distance of the planet from the Earth is calculated by the equation


We have said that Sheegra Kriya reduces the heliocentric postions to the geocentric.

According to this oscillating Epicyclic Model of Bhaskara, EP = R ( Called Thrijya ), PQ is theSheegra Phala, QL is the Bhujaphala and PL is Kotiphala.

The Hindu algorithms for the computation of mean and true celestial longitudes seems to be totally different from the Western, from the methods adopted by Kepler, Laplace and Co. Hence the Hindu Planetary Model is original and not influenced by Greco Roman sources, as some Western scholars believe.
This diagram is by courtesy of Jean-Pierre Lacroix and Robert Baywater,www.ancientcartography.net

We have the Double Epicyclic Model - that of Manda Epicycle and Sheegra Epicycles - in Indian Astronomy, which explain the Zodiacal and Solar anomalies. One Epicycle explains the Zodiacal Anomaly and the other the Solar Anomaly.

( Zodiacal Anomaly - That all planets move slower at Aphelion and faster at Perihelion.
Solar Anomaly - The astronomical phenomenon of Retrogression. Backward Motion. When a planet changes its course from perihelion to aphelion, it retrogrades in order to gain the Sun's celestial gravity )

"The bisected Indian equant model is pre-Ptolemaic' says he. Other Greek books, prior to Ptoemy, may have influenced Indian Astronomy,says he. Then what are those books, prior to the Almagest, which had influenced the Indian system? The answer is "unknown sources".

Remarks Duke " Indeed, since the very earliest investigation of the Indian models by Western scholars it has been presumed that the models are somehow related to a double epicycle system, with one epicycle accounting for the zodiacal anomaly, and the other accounting for the solar anomaly (retrograde motion) This perception was no doubt reinforced by the tendency of some Indian texts to associate the manda and sighra corrections with an even older Indian tradition of some sort of forceful cords of air tugging at the planet and causing it to move along a concentric deferent . Since our goal in this paper is to investigate the nature of any connection with ancient Greek planetary models, it is only important to accept that the models appear in Indian texts that clearly pre-date any possible Islamic influences, which could, at least in principle, have introduced astronomical elements that Islamic astronomers might have derived from Greek sources. ( "The Equant in India: the Mathematical Basis of Ancient Indian Planetary Models" By Dennis Duke, Florida State University ).