The Vedic astronomers never said like Kepler that planets traverse in elliptical orbits. But then they talked about Eccentric and Epicyclic theories. They said for the luminaries, the Sun and the Moon, reduction to the geocentric (Sheegra Kriya ) coordinate system was not necessary. But for the Tara Grahas, like Mercury, Venus, Jupiter, Mars and Saturn, both the jya samskaras ( trignometric corrections ) are necessary.

The Vedic astronomical texts say that the planets go in an epicycle, whose center moves along the mean circular orbit from west to east. This theory came to be known as the Epicyclic Theory. There is another theory called the Eccentric Theory, which states that a planet goes in a circle whose center is not the Earth, but a different point other than the Earth.

Bhaskara says " The Center of the Celestial Sphere coincides with the center of the Earth. The circle in which a planet goes does not have its center coinciding with the Center of the Earth". Hence the Vedic astronomers like Bhaskara, Brahmagupta and Aryabhata, prescribedbhujaphalam ( otherwise called Equation of Center for mandaphala, whereas in the case of the five Tara Grahas, this bhujaphala, despite connoting Equation of Center or mandaphala, also stands for corrections required to reduce their longitudes from the Heliocentric Coordinate System to the Geocentric Coordinate System ). 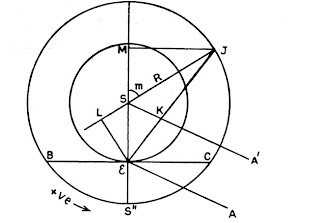 In the above diagram,


In order to get the geocentric longitude, the longitude of the Sun is deducted from the Ecliptic longitude and then we get the Sheegra Kendra, the angle between the planet and the Earth Sun plane.

In Indian Astronomy, Chara is the Ascensional Difference and is the difference between Right Ascension and Oblique Ascension.


And is calculated by the equation

Oblique Ascension means the longitudes measured along the Ecliptic, the Kranti Vritta.

Chara is used in the computation of Sunrise and Sunset.